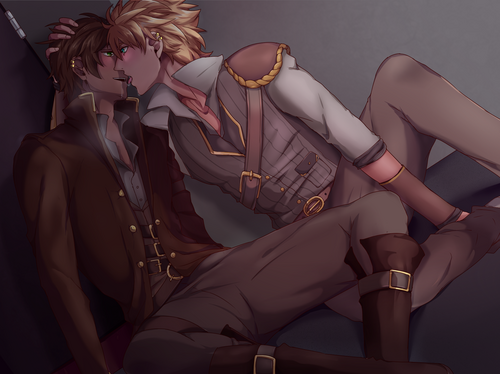 Steam keys are now available for the ones of you who bought Chasing the Stars through itch.io!

Get Chasing the Stars

I've been trying to get the endings I got before the Steam version was released, for the sake of achievements, but some of them don't unlock. It's not that important to me since I won't be getting all endings anyway, but for people who want to get a 100%, it'll be an issue.

The endings that don't want to unlock so far are End 1 and End 3. Keep in mind I won't be able to check for any of Mark's or normal endings as I'm not planning to do them - neither the so called "friendship" one I've discovered while checking the guide for other ways to get some of the bad endings (wanted to see if they're bugged no matter the way you reach them, and yes).

EDIT: End 9 achievement doesn't unlock as well. Same for End 12 (at least on Biel's route - haven't tried on Pol's). Aaand same for End 8. I won't be trying with any more endings so that's it. But I'm sure other people will report if the various normal or Mark ending achievements have problems too!

On a side note, I've discovered another thing that you may (or not?) want to twitch. You actually can't skip the credits unless you're already pressing the skip key before reaching the credits screen. And if you don't set the game so it skips all dialogues, it stops you at the screen before if this is a new ending, so yeah, you HAVE to watch the credits at that point - no matter what I press, it seems impossible go back to the menu until the credits end. The ending is quite short and it's pretty, so it's not an issue if playing the game at a normal pace. But when doing a lot of endings one after another just to unlock them, it gets pretty tedious. And well, since the ending names have been added since the pre-Steam version, the game considers the last dialogue box as "not read" and so yeah, I'm forced to watch the credits XD (I don't want to set it to skip all dialogue just in case there's something important for me to see).

That's odd.. I got a comment on Steam yesterday, barely an hour after I posted the game there (so I assumed it was someone who had already played the itchio version and only played the Steam one to get the achievements). It said they were able to get all the achis but one, end 12, and I checked and saw that, effectively, there's a mistake in my code for it. But the rest should unlock fine. Are you playing on a Mac computer, perhaps?

I'm playing on Windows, so no problem with that.

And I've tried both with my old saves from itch.io and with a fresh file just in case, so it shouldn't be that either.

EDIT: now, if it's only me, don't worry too much - as I said, I won't be getting all the achievements anyway, so a couple more or less won't change anything. But there's no guarantees someone else won't have the same issue.

Yeah, I know, but it's still strange. Can you try uninstalling it from Steam and installing it again? If you want to test if it works that way, of course.