A downloadable game for Windows, macOS, and Linux

Can you imagine the characters from A Hand in the Darkness, Chasing the Stars, and My Burning Heart as cats? And living in a cat café?

Well, imagine no more, this is it!

A Cat Café Story is a very short Visual Novel (just 7.5k words) with the fluffy version of our dear characters being themselves. Two endings and cuteness overload!

I just played this, and then I just had to show everyone what a bundle of cuteness you made. Thank you so much!

I somehow can't decide if this is more cute or weird... weirdly cute? Cutely weird?.... I'm getting way too confused over this thing!

I'm a big sad it doesn't include "Blood and Lust" and "Lurkers", though! Cat Aelius would have been such a massive yet cute kitty... ahem. And well, Eddy already looks a bit like a cat. Aah, I'm getting overwhelmed I think!

I wonder if I have seen all the scenes though - a bit hard to keep track after a while...

I guess I should report some bugs and typos here and there, even if this is only a short and funny project?

I don't know if you can do anything about it since I guess you have commissionned the art, but there's a layer mask error on the lights that are on Tirs' ears, hair and tail - it goes beyond the boundaries of the picture.

In the scene where Halim, Pol and Monty are trying to dissuade Adnan from escaping (that early one), and then Harun comes and is being himself, at some point there's a typo - "Harun lifts and eyebrown", instead of "eyebrow".

Oh, thank you, I didn't catch that typo! Let me know if you find more. And... I didn't notice that about Tirs' sprite. Since I work on a laptop, sometimes I can't appreciate art issues that you get to see on bigger screens :/ I hope it's nothing that bothers too much.

I'm on a laptop too, actually! But I'm an artist myself, so I think I simply notice these things easily, since this is something I have to be careful to avoid when I'm painting.

I didn't notice other typos though - I mean, English isn't my language so I could have missed something, but I don't believe so? It's a short game, so not much room for typos anyway haha! 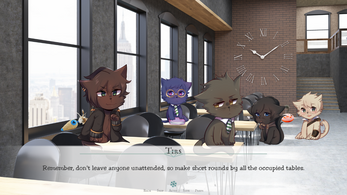 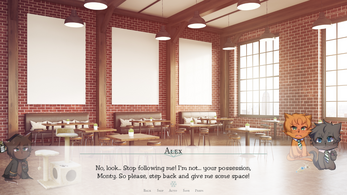 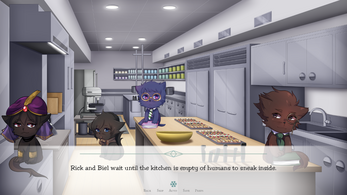 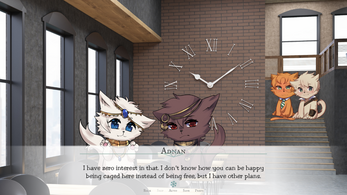