A downloadable game for Windows, macOS, and Linux

September, 1888. The shadow of the Whitechapel Murderer looms over London. Eddy Nichols, the eldest son of the first acknowledged victim, arrives to Whitechapel in search of answers. What he finds, though, is a panic-stricken city and a number of people eager to make the most of the horrible crimes: an American private eye, thirsty for fame and glory; the owner of an awful tabloid; a psychiatrist who advocates for suspicious, questionable methods, and an elusive, mentally unstable journalist. 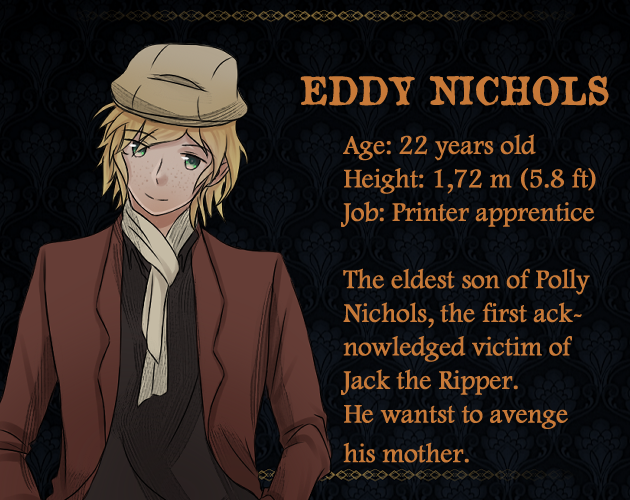 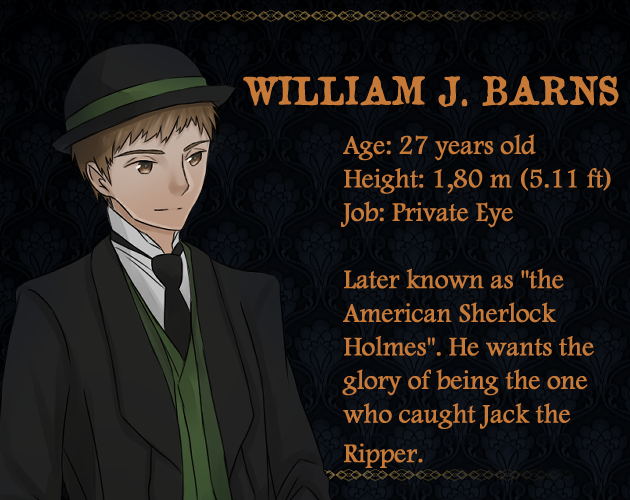 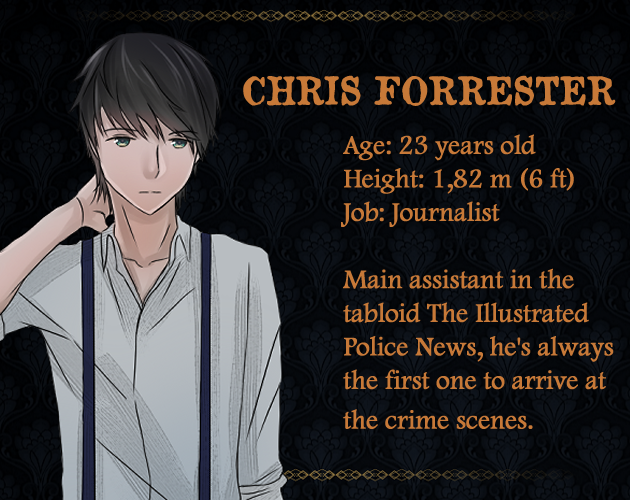 DISCLAIMERS: This story is based on well-known true facts, and most of the characters are inspired by real people. However, their personality and actions during the Whitechapel crimes are  just fiction.

The deprecating statements about England were a common opinion among the working class of the Victorian Britain, and by no means represent the opinion of the writer.

DO YOU LIKE OUR SOUNDTRACK? YOU CAN BUY IT ON BANDCAMP!

You can claim a Steam key of the game with your purchase.

In order to download this game you must purchase it at or above the minimum price of $3.49 USD. Your purchase comes with a Steam key. You will get access to the following files:

The idea of featuring real life references from the past, such as Jack the Ripper, the involved people, and blending the altogether into a short-length murder mystery Visual Novel is pretty neat itself.

Particularly appreciated the displayed magazine and newspaper pages, such as The Illustrated Police News studio’s eerie art – an unusual little feature, as well as, alluring art to explore.

You can read more about it in my review (https://gyepitypes.wordpress.com/2022/03/25/videogame-reviews-lurkers/)

Is this completed now? I swear only a few months ago it was still just a demo. It says it was published in 2019 though.

Oh, itchio might save the date of the first build uploaded or when the page was launched...

But yeah, I made a post announcing the full game on November 2nd!  ;)

Yeess! Thank you for the reply! I'm buying it today for sure!

Sorry, my itchio page is set to Paypal only. You can pay with your card through paypal, as a guest, or you can wait a few days until the game is released on Steam ;)

Steam just lists the game as being only available on Windows. Please tell me it'll be available on Mac as well?

It will be available for Windows, Mac and Linux on itchio, but Steam builds now require another layer of protection that I can't test myself for Mac, sorry.

No worries. As long as I can get my mitts on it. Steam can be a but of a pain in the butt. I'd rather get my games from itch, anyway.

Just out of curiosity, are you planning on finishing this game? I loved the demo so much! I need some romance with William! =swoon=

Yes, of course! As soon as possible!

why on earth do i want a route with Jack?? im so weird...

Okay so, i didn't noticed that this game was based off Jack the ripper  but i gotta say that this was very well done. The atmosphere and the music totally brought me in the mood and made the game easier to get into. The art is really good, and i'm really excited to know what would happen next. This was a good demo! Hope to see the full release !

Thank you! I'll try to finish it for Yaoi Jam Plus, next month.

Reply
Arcos Of Fireheart2 years ago(+1)

I love the demo. Just curious about one thing though.

When you get to finish this game will it get a re-coat of paint? e.g. new sprite looks, etc.? Or will you keep the original art style? Either way it'll be an amazing game ^^

Thank you for your kind words!

Since it was always planned as a short game (less than 50k words) and the sprites were done by a good friend of mine, we'll just add some CGs and more interactivity to the story.

I'll go back to Lurkers as soon as I finish the overdue updates to my previous games and the demo of my current long project, Night and Day. To be honest, I'm really looking forward to working again on it! I'm craving for a dark plot!

Reply
Arcos Of Fireheart2 years ago(+1)

I'm looking forward to Lurkers being done! I liked the idea of the plot too. As soon as I saw something about "Jack the Ripper" I was like "Aight time to download this."

When is this getting completed? I should play the demo, I'm not even sure why I haven't at this point. I own literally all of your other games... Except for the gladiator looking one? I'm not sure if that's BL, but I haven't looked into that one yet. Will this one have R18 features?

Lurkers is on hold until I finish some due updates and extra stuff for my previous games, sorry. It will have some adult scenes, but I haven't decided yet on the rating.

And about Blood and Lust, you should try that one! It's pretty short (and free!), but I had fun testing new features that I never used before. And it has a R18 scene ;)

After finishing the demo, I'm wondering what will come next. Keep up the good work for the complete version!
So, my bet on the culprit: Mr Purkiss. You get to know him, but not too much, you have his underling who is way too suspicious to be true, and he's the only one without the first name in the GUI. I wanted to know more about him in the demo haha!
But I liked the characters, especially William and his witty attitude! Eddy is the cutest, I really like his sprite design. It was a fun experience! :D

I think that it goes without saying this game is really good.

I'm completely in love with the Characters.

I love how Eddy is kind of weary of William at the beginning and that Eddy isn't the cliche "I'm afraid of people opinion's" kind of guy. I also love his sympathy for Chris (a bit of his soft side). And honestly he's a greatly written Character.

William: I don't really have a character read on him... but its fair to say this character despite having a slightly weird start with his "Sodomite" remark is going to be quite treasured by the MC (I think). And I'm still really curious about what his reward for the bet will be *wink wink* *nudge nudge*.

Chris : My sympathy levels rose from 100 to 500. When he was telling his story I felt reaaalllyy bad. I think that Chris would be (as you've confirmed ) a really good romance route because if it turns out that he murdered Eddy's mom then I feel like if Eddy fell in love with his mother's murderer ... man... But still Chris is another perfect part of the puzzle...

The backgrounds were really well done... And the sprite art was fairly good for a demo=). I really have no complaints about it ....

I think this is probably one of the first thrillers I've ever read/played and I already have really high expectations :)

The bigesst issue I'd say I had was the fact that the demo was soooo short ...

P.s I see you researched this

^_^ Thank you so much for the review, it really makes my day!

Liking the story so far. I look forward to reading it when it's finished.

Good luck with your project!

When will the demo be released? If there is a demo.

Will this be a thriller sort of thing?

I'm happy the idea sounds interesting! And yes, it's a thriller: basically the retelling of the Ripper's crimes from the point of view of Eddy Nichols, the eldest son of the first victim. There will be a demo at the end of August, and then it will probably be put on the backburner until I finish all the loose ends from my previous games.

About the rating... It's not decided yet. I don't mind one way or the other, so that will be decided by the artist ;) 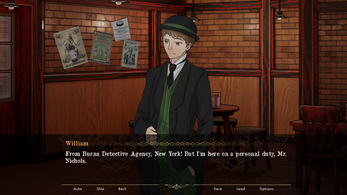 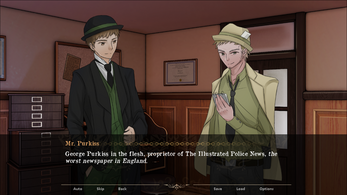 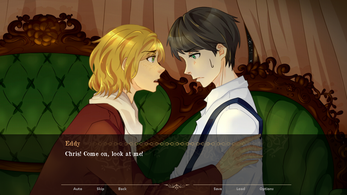 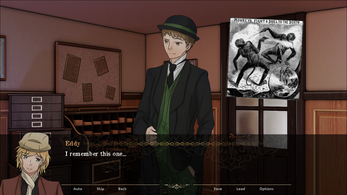 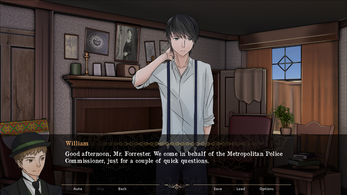